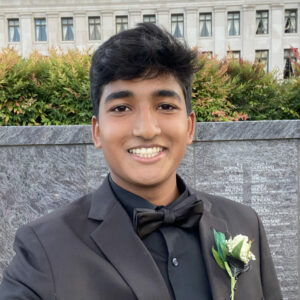 Dhanush Sunchu is currently a senior attending Olympia High School. After high school, Dhanush plans on attending university and majoring in computer science. As a curious thinker and driven individual, he hopes to make strides in the tech field.

Intern Experience: Dhanush’s intern experience consisted of cybersecurity training and search engine optimization, which allowed him to gain broad experience in the tech field. He also gained valuable professional and workplace skills that will help him down the road in his career. In addition, the internship solidified Dhanush’s post-high school goal of becoming a computer science major.

In the early 2000s, he and his wife opened a Caribbean restaurant in Park City, Utah. One restaurant led to three. After the financial crisis of 2008, Malcolm returned to corporate life and moved his wife and three children to Puyallup, WA, with the Mitel Communication company. He later launched an Interconnect company in 2011. In 2016 he formed Ovation Technology LLC. The technology industry has afforded Malcolm the ability to harness the years of his high-level corporate and passionate entrepreneurial experiences to form a unique company dedicated to outstanding client service and the application of technology to build businesses.

Malcolm has been honored to complete the University of Washington Executive program in 2017, the Small Business Administration (SBA) Emerging Leaders in 2016, and the University of Washington Business Collaborative program in 2018. He’s led many teams over the past thirty years, and looks forward to learning more with the Thurston County Leadership program.